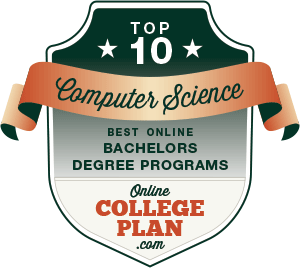 According to the Bureau of Labor Statistics, computer programmer jobs are expected to expand as fast as average (8% increase) until 2022. Throughout all industry sectors and organizational levels, however, there is a massive shortage of technically skilled workers. While a computer science degree prepares graduates for entry level programming positions, senior level programmer knowledge takes several years to build, and senior developers are perpetually in very high demand.

Colorado Technical University offers a fully online bachelors in computer science degree with multiple start dates yearly. Program offerings center around learning C++, C#, Object Oriented Programming, and how to begin thinking like a programmer. The program offers increased flexibility through their CTU fast track program, in which students can obtain credit for program skillsets they can prove they know through competency checks. Fast Track offerings are free and can accelerate time until degree and lower program costs by up to 30%. Colorado Technical University is classified as a national university according to US News, and is ranked 1st and 2nd of programs surveyed in regards to student happiness and student reviews, respectively.

Old Dominion University offers a fully online bachelors in computer science degree that mirrors the university’s traditional on-campus offerings. The program requires 120 credit hours in total, but offers a generous transfer policy, including the ability to obtain guaranteed admission to the program for students graduating from select Virginian community colleges. 96% of students who have attended Old Dominion Online were very satisfied with their experience, and student happiness and reviews ranked 7th and 2nd of programs surveyed, respectively. Old Dominion University is classified as a national university according to US News.

Thomas Edison State College offers a fully online bachelor of arts in computer science degree that seeks to blend a quality background in the liberal arts with a specialized knowledge of computer science. Thomas Edison State College’s motto is “exclusively for adults”, an adage they promote through the heightened flexibility of programs, and the additional support for non-traditional students or those seeking to complete a degree they began some years ago. A full 61% of students complete their degree in 3 years or less due to a generous transfer policy and support for degree completion. Thomas Edison State College was ranked 3rd and 2nd of programs surveyed in student happiness and reviews, respectively.

DePaul University offers a fully online degree completion program in computer science that leads to a bachelor of science in the discipline. The program is built around students who have completed the equivalent of one year of a computer science degree and wish to continue their studies online. The computer science degree completion process is generally laid out into three years of study for students who have taken some general education requirements and a semester in either Java or C++, though degree completion plans are tailored to individual students. DePaul University was ranked 7th and 2nd of programs surveyed for student happiness and reviews, respectively. According to US News DePaul is a nationally ranked university.

The University of Florida is a land-, sea-, and space-grant university that is headquartered in Gainesville, Florida. It was founded in 1853, and is one of the first few universities to be part of the State University System of Florida and is also one of the first institutions to be elected as part of the Association of American Universities. The AAU is a group of North American Research universities, and UF (as the school is most often abbreviated) is the only one in Florida. Their College of Liberal Arts is the particular division that has a Bachelors in Computer Science degree. It is a 120 credit program that paves the way for careers in software engineers, researchers, computer systems analysts, and programmers or gives students the foundation they need to further their education at the graduate level.

What is the Fastest Way to Get a Bachelor’s Degree if You Have an Associate Degree?

What Are The Top Online Colleges With The Best PhD in Economics?

What is the salary range for jobs if I have an online bachelor’s degree in education?

Can You Get Online College Credit for Work Experience?