In 1869, Augsburg College became the first Norweigan Lutheran Seminary established in the United States in the town of Marshall, Wisconsin. In 1872 the school moved to Minneapolis, however, the first graduation was not held until 1879. It wasn’t until some time later, around 1911 under the president of George Sverdrup, Jr. that the school began to broaden its academics toward more than ministry alone. Eleven years later, in 1922, the school began to admit women under the leadership of Gerda Mortensen, Dean of Women. It was after World War II when the college had become larger than the seminary and further expansion awaited the school. By 1954 the college had established itself and expanded into an accredited liberal arts college. 1963 is when the seminary moved to St.Paul after the merging of the Lutheran Free Church and the American Lutheran Church, leaving just Augsburg College in Minnesota.

In more modern times, AC has grown and expanded a great deal. Augsburg added the Music Hall, Mortensen Hall, Urness Hall, the Christensen Center, Ice Arena, and Murphy Place while Oscar A. Anderson presided over the school, which was 1963 to 1980. He was also known for reaching out to non-traditional students to ensure everyone had an equal opportunity to get their education. His presidency was followed by Dr. Charles S. Anderson until 1997. During his leadership, he not only focused on expanding the academics of the college, including adding two graduate programs, but he also helped expand the school physically as well. The Foss Center for Worship, Drama, and Communication; the Oscar Anderson Residence Hall; and the James G. Lindell Family Library were erected under his leadership.

Dr. William V. Frame became president in 1997 and is credited with helping to hone the values and identity of the school as being one from the city that excels in education grounded in vocational calling as well as teaching students how to be productive citizens through the combination of theoretical learning and practical experience. In 2006, Dr. Paul C. Pribbenow became the president of Augsburg College and is credited by articulating the vision for the school, “We believe We are Called to Serve Our Neighbor” which also reinforces some of the core values which the school upholds.

The City of Minneapolis, Minnesota

When visiting or going to school in Minneapolis, there is not a shortage of things to do or see. Naturally, as a big city, it has an abundance of terrific restaurants, grill & bars, and plenty of places to shop. There are also local breweries which offer tours to the public and the Minneapolis Skyway System is a unique must-see.

Some of the other must-see places to visit in Minneapolis are the Basilica of St. Mary and the American Swedish Institute. Nearby in Chanhassen, Paisley Park, the estate and production complex of the late music legend, Prince, is now offering tours to the public.

Undergraduates interested in what majors Augsburg has to offer should be pleased by the expansive selection available: 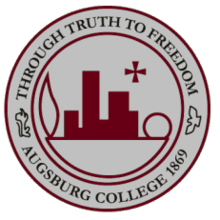 Accreditation: Augsburg College is accredited by The Higher Learning Commission of the North Central Association of Colleges and Schools. Augsburg also is further accredited by the following:

Mission: “Augsburg College educates students to be informed citizens, thoughtful stewards, critical thinkers, and responsible leaders. The Augsburg experience is supported by an engaged community that is committed to intentional diversity in its life and work. An Augsburg education is defined by excellence in the liberal arts and professional studies, guided by the faith and values of the Lutheran Church, and shaped by its urban and global settings.”

For more information about Augsburg College or to connect with them: