Cryptomnesia is the phenomenon of a forgotten memory being mistaken by the brain for a new and original thought. Unfortunately, this can manifest as unintentional or subconscious plagiarism. It isn’t new, and although you may have never heard of it before, it’s not at all rare. Let’s take a close look at this odd occurrence: what it is, why it happens and who it’s happened to.

How does cryptomnesia actually happen? (1)

In many cases, cryptomnesia results in unintentional plagiarism by artists, speech writers and students.

Could digital overload be a reason for cryptomnesia?

Cognitive psychologist Brian Bornstein from the University of Nebraska thinks so:

“What happens is that we are constantly processing a huge amount of information, but our brains can only retain so much, so our brains prioritize the information and concentrate on only the most important aspects of that information.” (2)

The rich and famous would never steal … or would they? Here are some purposeful, accidental and questionable cases of plagiarism.

Keller’s “Frost King” story, written when she was only 11, was seen years later to have been a retelling of the already published “The Frost Fairies.” Accusations of plagiarism scared Keller so much that she never published fiction again. (4)

The singer’s hit “Stay With Me” caught rock legend Tom Petty’s attention for having a chorus remarkably to Petty’s “I Won’t Back Down.” After a lawsuit, Petty was added to the songwriting credits for Smith’s song. (5)

Harrison was sued for copyright infringement for his song “My Sweet Lord,” which the Chiffons claimed sounded like their song “He’s So Fine.” Though the Chiffons won in court, it was decided that Harrison’s infringement was unintentional. (5)

Years after his death, MLK was accused of copying from others for his writings and speeches, though some remain certain that King believe his ideas were completely original at the time. (6)

Eliot’s poem “The Waste Land” was found years after its publication to be a mix of poems from lesser-known poets. It’s unknown if this was intentional plagiarism or if Eliot had read works by these poets and later suffered a bout of cryptomnesia when writing his own. (6)

What is considered plagiarism? (7)

Plagiarism includes stealing the words or ideas of another, or using the work of others without proper citation. It includes:

According to a recent survey of college undergrads in the U.S.: (8)

79% plagiarized their assignments from the internet or didn’t cite sources when appropriate.

Let’s talk about how to make sure your work is original.

1. When doing research, carefully document and reference all sources and cross-check your work to make sure you have not unintentionally plagiarized any part.

2. Use Google to make sure you have not copied (or recalled) any passages verbatim.

4. Research as many original works on your topic as possible. Chances are your idea has been thought of before and possibly documented.

5. Use your professor or other students as editing resources. They might be able to tell you if they’ve come across your idea elsewhere. 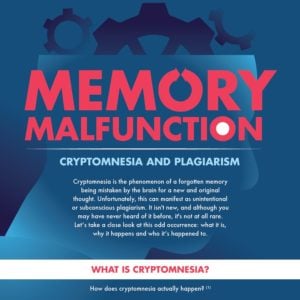