National University is a private, not-for-profit postsecondary educational institution and which has its main campus located in the city of San Diego, California. The school, which is commonly referred to as NU, is the second-largest private not-for-profit education provider based in the state of California, and the 12th largest in the United States. The school is headquartered in La Jolla, California and operates campuses in San Diego, California and the states of Georgia, Florida, Nevada and Virginia.

National University was originally established in 1971 by David Chigos, who is a retired United States Navy lieutenant commander and a director of employee training for the General Dynamics Corporation which is located in San Diego. David Chigos saw the need for a school that provides an education through the use of a non-traditional university educational format and which offers in-demand degree programs to serve better those who are working adults that wish to start a new career, to further their current professional careers or to just obtain a higher education for personal reasons.

The quality educational programs that are offered at National University are not the only draw that the school holds for many students, as the area surrounding National University’s main campus in San Diego also offers many sights and activities for attending students, such as: 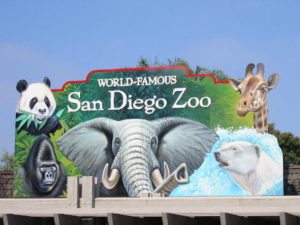 San Diego Zoo houses more than 3,700 animals in total, which represents more than 650 different species and subspecies. The zoo was a pioneer in the “open-air zoo” concept, which features cageless exhibits, better mimicking the animals natural habitats, and is one of the few zoos in the world to have successfully bred giant pandas.

SeaWorld San Diego is an aquatic creature theme park, featuring many rides, exhibits and educational and entertainment-centric animal shows. Some of the more popular animals on exhibit are the park’s killer whales, dolphins, mantas, and penguins. The park attracts more than 3.5 million visitors yearly.

Mission Basilica San Diego de Alcalá was the first Franciscan (a religious group of people that adhere to the teachings and spiritual disciplines of Saint Francis of Assisi) mission in The Californias; a province of New Spain. The mission was the site of the first Christian burial in Alta California and is now a historical site of great importance to the area.

Old Town San Diego State Historic Park is a state-protected historical park which commemorates the early days of San Diego, and which includes many different historic buildings from the years of 1820 to 1870. Many of the buildings now serve as museums and the area also features stores with local artisans showcasing their various crafts.

National University’s Online Education division offers more than 70 academic degree-granting and certificate-granting programs fully online. Some of the programs available for students to enroll in include:

What Makes the School Unique: Commitment to the Locally Based Military

National University offers classes taught on military bases in the San Diego area and the Twentynine Palms area at a reduced price for qualified military personnel. These bases that the discounted classes are offered at are:

Some of the most notable alumni of National University include:

What are the top online colleges for Hispanic students?

What Can You Do With a Doctorate in Educational Leadership?

What Is A Doctoral Degree Online Program Best Suited For?