The History of College Financial Aid

While financial aid is a routine aspect of college life today, this hasn’t always been the case. Pell Grants, Stafford Loans and work-study are all relatively new initiatives, conceived to democratize universities and expanded to help Americans meet the rising costs of higher education.

The History of Financial Aid

1643: Scholarships in the U.S. begin as philanthropy by the rich for the poor, like Lady Anne Radcliffe Mowlson’s donation of £100 to Harvard to fund the education of disadvantaged students. (1)

1843: Harvard establishes its General Beneficiary Fund, a lending agency to make zero-interest loans to students who could not otherwise afford to attend. (1)

1938: College Board begins administering the SAT to identify students for merit-based scholarships.(1)

1944: The Servicemen’s Readjustment Act, better known as the GI Bill, is enacted to, in part, cover the tuition and living expenses of World War II veterans attending college. (2)

1945: There are 1.7 million students enrolled in institutions of higher education in the U.S. (1)

1954: College Board opens its College Scholarship Service to connect low-income and minority students with funding from universities. (1)

1960: There are 4 million students enrolled in institutions of higher education in the U.S. (1)

1965: The Higher Education Act introduces the framework for many components of financial aid still in use today, like PLUS (Parent Loan for Undergraduate Students), Guaranteed Student Loans (government-backed private loans) and College Work-Study. (2)

1992: PLUS limits are uncapped, allowing parents to borrow up to the total cost of attendance minus any other funds their student received, and Unsubsidized Loans become available. (2)

1993: The Student Loan Reform Act aims to transfer at least 60% of Stafford Loans to Direct Student Loans (government-issued loans) over the next 5 years and peg monthly repayments to a borrower’s income for 25 years. (2)

2010: The Student Aid and Fiscal Responsibility Act is signed into law, eliminating the lending of Stafford Loans in favor of Direct Loans.(5) 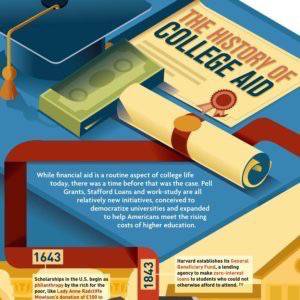