Students are drowning in debt.
How bad is it?

40 million: cumulative number of students currently in debt
That’s more than the entire population of Canada, Poland, North Korea, Australia and more than 200 other countries. And 4X greater than the population of Sweden.

If all else fails and you are already in debt…..

Tips for keeping debt under control
1. Keep track: Of balance and repayment status
2. Saving Grace Period: how long you can wait before first payment
3. Stay in Touch: Ignoring lender bills lead to default
4. Pick the Right Repayment Option
5. Don’t Panic: You can temporarily postpone your federal loan payments
6. Stay out of Trouble! Not paying can lead to delinquency
7. Prepay If You Can
8. Pay Off Most Expensive Loans First
9. To Consolidate or Not to Consolidate Your Loans: Consider your options
10. Deduct your student loan interest at tax time
11. Loan Forgiveness: Sometimes it is an option 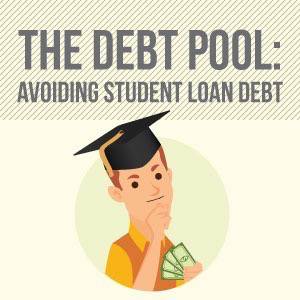